You are here: Home / Archives for rockslide 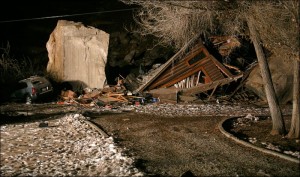 Two people were killed when a huge boulder crashed into a home during a Thursday rockslide. The rockslide occurred on Route 9 near the west end of Rockville, Utah at around 5 p.m. It sent a boulder right into the home, said the police chief of Springdale. The chief said it was hard to describe but the boulder was larger than the two-story home it slammed into. Officials located the two … END_OF_DOCUMENT_TOKEN_TO_BE_REPLACED