You are here: Home / Archives for reporter beheading 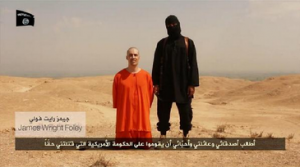 After the beheading of the American journalist by Islamist extremists, U.S. President Barack Obama expressed his revulsion at the violence of the IS group and vowed that the United States would do all in its power to protect its citizens. The American President went on to describe the IS group as a cancer that revolves around a bankrupt ideology. On Wednesday, the Pentagon released information … END_OF_DOCUMENT_TOKEN_TO_BE_REPLACED