You are here: Home / Archives for police shooting 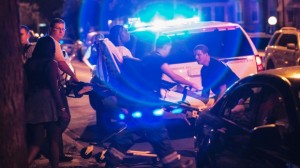 The 4th of July weekend was particularly blood-ridden in Chicago, where 60 people were shot and nine of the shooting victims succumbed in the South Side area of the city starting with Thursday afternoon. Police reports confirm the news of violent activity in the South Side neighborhoods and state that at least eight of the residents shot were shot by police officers. Chicago police super Garry … END_OF_DOCUMENT_TOKEN_TO_BE_REPLACED