You are here: Home / Archives for hottest October 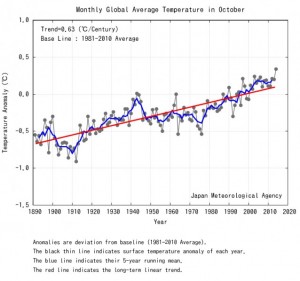 According to new data released Friday from NASA and the Japanese Meteorological Agency (JMA), last month was the warmest October ever since official weather records have been kept in the late 1800s. Furthermore, according to NASA, last month tied with 2005 as the warmest October on record globally. Japan’s data show the month as significantly warmer than 2003, its previously warmest … END_OF_DOCUMENT_TOKEN_TO_BE_REPLACED