You are here: Home / Archives for Former Marine Banned from School 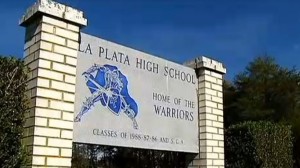 A former U.S. Marine who is an Iraq War veteran was banned from his daughter’s school after opposing the girl’s Islam homework. The former marine banned from school is Kevin Wood and his daughter goes to La Plata High School in the city of La Plata, 30 miles of Washington. He received a no-trespassing order on Friday after he got into a heated argument with the high school’s vice principal, … END_OF_DOCUMENT_TOKEN_TO_BE_REPLACED