You are here: Home / Archives for christian sudanese woman 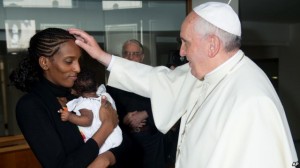 Mariam Yahya Ibrahim was sentenced to death for apostasy in Sudan when she married a Christian American, after being turned in to the authorities by her relatives. She converted from Islam to Christianity (as she was raised by a Christian mother after she had been left by Mariam’s Muslim father) and when she was asked to refuse her religion, the Sudanese woman had to face jail for not doing … END_OF_DOCUMENT_TOKEN_TO_BE_REPLACED