You are here: Home / Archives for Zvezda service module 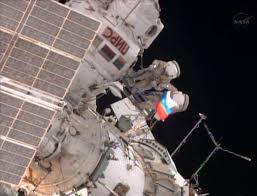 After donning their bulky white spacesuits, flight engineers Alexander Skvortsov and Oleg Artemyev opened the hatch on the Pirs docking port at 10:10 a.m. (1410 GMT) and floated outside a few minutes later. The two Russian cosmonauts ventured out into the vacuum of space for a spacewalk on Thursday, tasked with carrying out important work including the installation of an antenna outside of the … END_OF_DOCUMENT_TOKEN_TO_BE_REPLACED