You are here: Home / Archives for Utah transportation funds 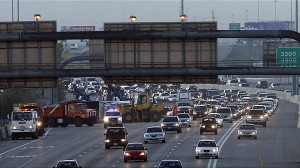 A new study by Transportation for America has made some startling revelation about Utah’s federal funding for highways and mass transit. The study, released on Wednesday, has found that the beehive state could lose more than USD 400 million in federal funding for highways and mass transit next year if Congress does not act quickly to stop the Highway Trust Fund from going broke within the next … END_OF_DOCUMENT_TOKEN_TO_BE_REPLACED