You are here: Home / Archives for US unemployment rate 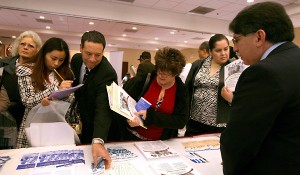 Only a few days after voters voiced their asperity regarding the U.S. economy, the government announced that employers added 214.000 extra jobs in October. This represents the healthiest pace of hiring in the last eight years. In addition to this, the Labor Department also announced that 31.000 more jobs, than were previously estimated, were added in August and September. These much needed … END_OF_DOCUMENT_TOKEN_TO_BE_REPLACED