You are here: Home / Archives for sunday 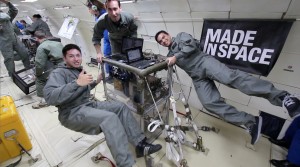 After the 3D printing era has begun on Earth, astronauts are now preparing to bring one of these printers to the International Space Station, so that in the future, they won’t have to crank out spare parts in order to fix their spacecraft. Instead, they will simply print the part they need. Produced by a Northern California company called Made in Space, the 3D printer will be sent to the … END_OF_DOCUMENT_TOKEN_TO_BE_REPLACED