You are here: Home / Archives for Spinosaurus 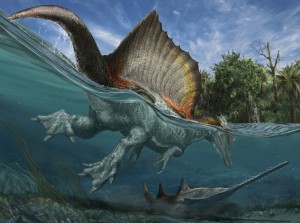 Spinosaurus aegyptiacus was a large predator roaming the Earth 95 million years ago. Researchers discovered fossils of the dinosaur they believe was 9 ft longer than Tyrannosaurus Rex, but having a similar size. The weird looking animal was an unusual dinosaur, as it is known as the only one to have adapted for a semi-aquatic lifestyle. During swimming, the massive back sail probably looked like a … END_OF_DOCUMENT_TOKEN_TO_BE_REPLACED