You are here: Home / Archives for rocketfire 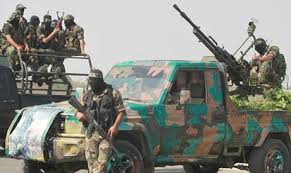 On Wednesday, three rockets were fired from Palestine at Israel two hours before a temporary truce between the two countries had expired. According to Israeli intelligence, one of the rockets was intercepted by the country’s Iron Dome defense system while another hit open land. Neither rockets produced damages or injuries, according to Israeli reports. The latest ceasefire between the two sides … END_OF_DOCUMENT_TOKEN_TO_BE_REPLACED