You are here: Home / Archives for Rasmieh Odeh 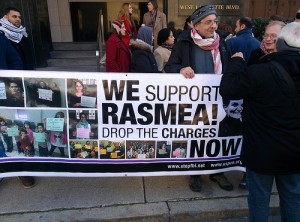 A Detroit jury found a Palestinian immigrant guilty of hiding her involvement in terrorist activities before her arrival in the U.S. from the immigration authorities. Rasmieh Yousef Odeh, 67, was convicted by an Israeli military court for bombing a supermarket and killing two people in 1969. After spending ten years in an Israeli jail, Odeh was released as part of a deal with the Popular Front … END_OF_DOCUMENT_TOKEN_TO_BE_REPLACED