You are here: Home / Archives for Quantum Droplet 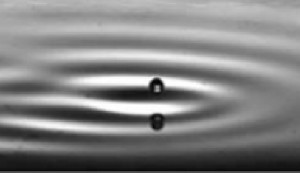 The scientists in Germany and the United States have found an exotic new type of particle that behaves like a quantum droplet or dropleton. Describing the newly discovered particle as a quasiparticle - an amalgamation of smaller types of particles, the researchers said that it behaves a bit like a liquid droplet. The droplet does not dawdle. It constitutes of roughly five electrons and five … END_OF_DOCUMENT_TOKEN_TO_BE_REPLACED