You are here: Home / Archives for pulsar-pounding 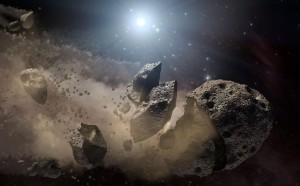 For PSR J0738-4042, which is being pounded by giant asteroids, it's just another day. The small pulsar has an uber-powerful X-ray blaster to muddle through the errant space rocks. The evidence was found by the scientists using CSIRO's Parkes telescope and another telescope in South Africa. "One of these rocks seems to have had a mass of about a billion tonnes," Australia's Commonwealth … END_OF_DOCUMENT_TOKEN_TO_BE_REPLACED