You are here: Home / Archives for police officer shooting 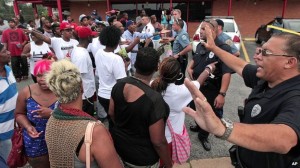 While the police still hasn’t released the name of the police officer that shot Michael Brown, the 18 year-old African American teenager, demonstrators have been protesting more violently. Police in Ferguson insisted that demonstrators only rally during the day after the three nights in which violent protests took place. Protesters had planned a rally for Wednesday afternoon. Demonstrators are … END_OF_DOCUMENT_TOKEN_TO_BE_REPLACED