You are here: Home / Archives for paris explosion 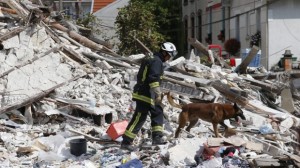 An explosion that caused an apartment block to partially collapse in Paris, France, killed at least 6 people, according to latest reports. A mother and her two teenage children were among the dead. The bodies of a child believed to be around 10 years old, a boy aged something between14 and18 and two women were recovered from the remains of the four-store building in the … END_OF_DOCUMENT_TOKEN_TO_BE_REPLACED