You are here: Home / Archives for mars lake 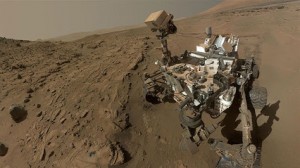 Everyone’s favorite little machine, the NASA Curiosity rover is now exploring a huge crater which the scientists believe to have been a huge lake a long time ago. The scientists have named the huge crater Mount Sharp and is a three-mile high pile of layered debris which rises from the floor of another crater named Gale Crater. The NASA experts believe this crater was formed many billions of … END_OF_DOCUMENT_TOKEN_TO_BE_REPLACED