You are here: Home / Archives for kurdish forces 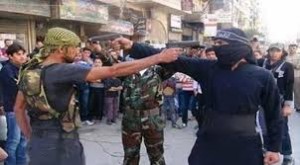 Saturday marked a horrific day when countless Yazidi men were shot by Islamic State extremists after they were lined up in groups. Islamic State fighters opened fire on the Yazidi men and killed them with assault rifles, only to abduct their wives and children later. The mass killings in Kocho were a testimony to the fact that the Iraqi people are still at risk in spite of the U.S. and Iraqi … END_OF_DOCUMENT_TOKEN_TO_BE_REPLACED