You are here: Home / Archives for images of red planet 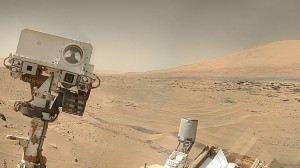 US space agency NASA has released lateast pictures of Mars and its surface alongwith some of the selfie of Curiosity. The rare images, clicked by Curiosity on April 27 and 28, were assembled by space blogger Jason Major. The latest selfie of Curiosity rover shows its ‘face’ i.e. the eye-like navigation cameras and the workhorse Mastcam. The pictures were taken by a camera mounted on an arm … END_OF_DOCUMENT_TOKEN_TO_BE_REPLACED