You are here: Home / Archives for Facebook bus drivers 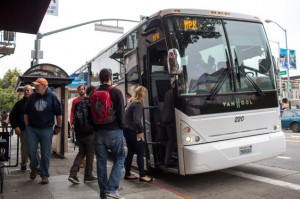 Private bus drivers who take Facebook employees to and from the Menlo Park campus have agreed to unionizing. Drivers voted 43-28 to join Teamsters Local 853. Shuttle bus drivers who schlep Facebook employees to and from Silicon Valley began voting on Wednesday regarding their forming a union, arguing they have an archaic relationship with the tech giant, comparing their situation to nobles and … END_OF_DOCUMENT_TOKEN_TO_BE_REPLACED