You are here: Home / Archives for Eocasea martini 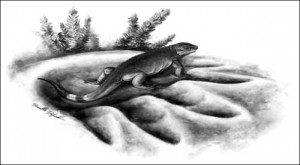 The fossil of a newly-discovered species called Eocasea martini is being described as a sort of missing link in the transition from carnivorous to herbivorous behavior in land animals. Scientists have discovered a fossil of newly-found species Eocasea martini which may provide some vital information about the evolution of herbivorous. The study says it may be a missing link in the transition … END_OF_DOCUMENT_TOKEN_TO_BE_REPLACED