You are here: Home / Archives for early human migrations 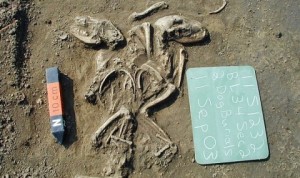 According to a new scientific study conducted at the University of Illinois, the first peoples to ever migrate into the Americas were not accompanied by dogs. The new study reveals that actually dogs were brought to America 10,000 years ago, later than previously believed. The researchers have analyzed genetic evidence from ancient dogs discovered in South and North America, suggesting that … END_OF_DOCUMENT_TOKEN_TO_BE_REPLACED