You are here: Home / Archives for dwarf planet

NASA has recently released the sharpest picture of the dwarf planet Ceres. The picture was taken by its Dawn spacecraft, which is scheduled to enter the planet’s orbit five weeks from now. The 590-mile wide Ceres is the largest object in the asteroid belt. It was previously classified as an asteroid, but due to its particular features it was promoted to the rank of dwarf planet in the same year … END_OF_DOCUMENT_TOKEN_TO_BE_REPLACED 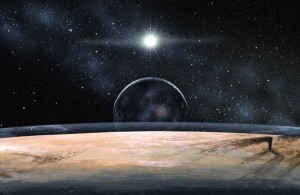 Astronauts have found a new dwarf planet far beyond the orbit of Pluto. The Carnegie Institution for Science in a report said that Carnegie’s Scott Sheppard and Chadwick Trujillo of the Gemini Observatory detailed the discovery of a distant dwarf planet. The plant is called 2012 VP113 or “Biden”. This is because of the VP in the planet’s name, which was found beyond the known edge of the Solar … END_OF_DOCUMENT_TOKEN_TO_BE_REPLACED 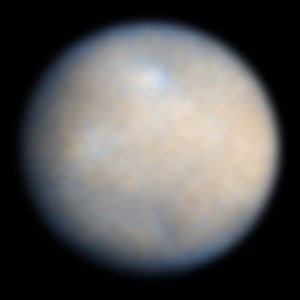 The European astronomers have discovered a dwarf planet, Ceres, in the asteroid belt spouting water vapour. According to the scientists this discovery has strengthened the existing theories of how life began on Earth. Notably, several researches have said that life was kickstarted on the Earth by a bombardment of space rocks. Ceres is the biggest object in the asteroid belt lying between two … END_OF_DOCUMENT_TOKEN_TO_BE_REPLACED