You are here: Home / Archives for David Haines beheading 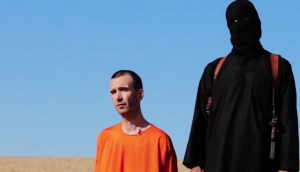 Britain's Foreign office declared that the video showing the beheading of David Haines, the British captive, is authentic. David Cameron, the Prime Minister, praised Haines as a hero, and he vowed to continue his efforts to hunt "down those responsible and bring them to justice no matter how long it takes." The gruesome video was released on Saturday by the Islamic State (also known as ISIL or … END_OF_DOCUMENT_TOKEN_TO_BE_REPLACED