You are here: Home / Archives for Continuity 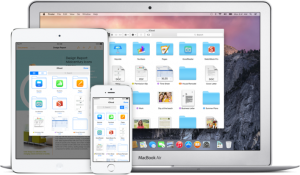 Every Apple event shows something surprising to the world and last week’s World Wide Developers Conference (WWDC) was nothing different. Apple announced iOS 8 – the fastest and the best Apple’s mobile operating system yet and OS X Yosemite – feature rich desktop operating system. Both the operating systems are robust and feature rich and until Monday’s keynote they had their independent … END_OF_DOCUMENT_TOKEN_TO_BE_REPLACED