You are here: Home / Archives for comet lander 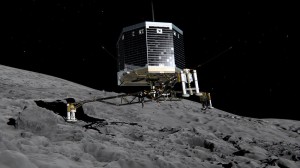 The European comet lander known as Philae has detected organic molecules that contain the element that is the basis of life on Earth and that element is carbon. The Philae made the discovery before its battery ran out and the lander had to shut down. The German scientists who are in charge of the Philae comet lander said that they do not know for sure if the organic molecules found on the comet … END_OF_DOCUMENT_TOKEN_TO_BE_REPLACED