You are here: Home / Archives for climate change papal letter 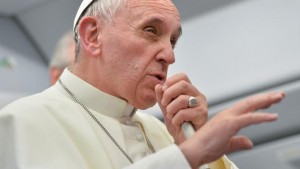 In 2015, Pope Francis plans to write a letter to all Catholics to warn them about the threat global warming poses to poor communities across the globe. The letter called a papal encyclical is meant to raise awareness to all Catholics about climate change and make them get involved in fighting it. Besides the letter, the pope also plans to talk to the UN general assembly about environmental … END_OF_DOCUMENT_TOKEN_TO_BE_REPLACED