You are here: Home / Archives for china death penalty 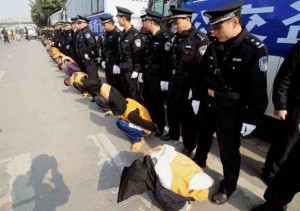 China will cut the death penalty for 9 offenses from a list of 55 crimes punishable by death. Human right groups are estimating that China uses the death penalty more times than any other country, although the Chinese government refuses to reveal the total number of executions. The ruling took place on Monday and it was taken by the Communist Party’s state parliament. The official Xinhua state … END_OF_DOCUMENT_TOKEN_TO_BE_REPLACED