You are here: Home / Archives for california students 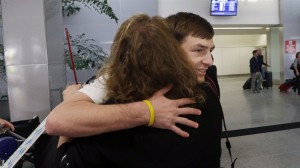 Four Californian teenagers just returned home on Tuesday after being detained in Russia at a youth leadership conference and interrogated by police. The students were detained on Thursday in St. Petersburg and were only allowed to leave the country on Monday. They apparently possessed a wrong type of visa. The four teenagers had to pay a fine of $110. “I believe we got caught up in a bigger … END_OF_DOCUMENT_TOKEN_TO_BE_REPLACED