You are here: Home / Archives for allies 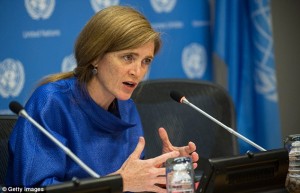 US ambassador to the United Nations, Samantha Power, claimed that America’s efforts to destroy the Sunni extremists wreaking havoc in the Middle East are being supported by over 40 countries. What the ambassador failed to mention was the extent of their commitment and of course, to name them. France has already clearly shown the extent of their involvement in the war against the Islamic State … END_OF_DOCUMENT_TOKEN_TO_BE_REPLACED