You are here: Home / Archives for Al Qaeda in Yemen confirms involvement in Charlie Hebdo attack 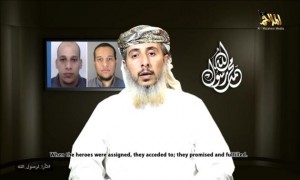 A video in which a member of Al Qaeda in Yemen confirms involvement in the Charlie Hebdo attack was recently posted on YouTube. Islamist extremists killed a total of 17 people during a three day attack that began last week at the headquarters of the French satirical newspaper as a way of revenging the prophet Mohammed whose image was used by Charlie Hebdo cartoonists in a series of sketches, … END_OF_DOCUMENT_TOKEN_TO_BE_REPLACED