You are here: Home / Archives for 5 killed in plane crash 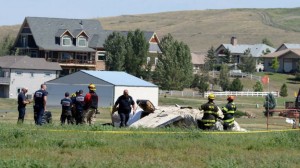 According to the National Transportation Safety Board (NTSB) spokesman, a total of five people were killed after a small plane crashed on Sunday near an airport in the north of Denver. A driver passing by the airport at 11:50 a.m. reported the crash. Three of the five people riding the Piper PA-46 died inside the plane wreck, while two others died while they were being treated in hospitals. The … END_OF_DOCUMENT_TOKEN_TO_BE_REPLACED