You are here: Home / Archives for 5 dead in fire 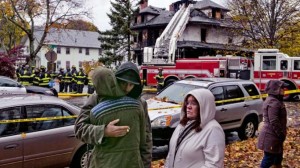 A fire took place near the University of Southern Maine's commuter campus on Saturday morning. Authorities say that five bystanders were killed, and one was critically injured. Authorities have yet to say if the victims were students. The fire was reported at 7:17 AM, right after a major Halloween party took place a day before. "We do not know whether the victims are residents of the home or … END_OF_DOCUMENT_TOKEN_TO_BE_REPLACED