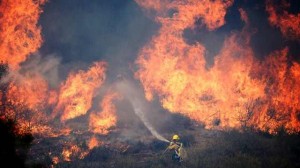 It was announced on Thursday that a man was charged with starting last year’s Rim fire. Federal prosecutors made the announcement, saying that a 32-year old man from Columbia, California was behind the fire that consumed more than 250,000 acres exactly one year ago. The man charged is named Keith Matthew Emerald and he was indicted with four counts, it was announced by the U.S. Attorney’s Office … END_OF_DOCUMENT_TOKEN_TO_BE_REPLACED