You are here: Home / Archives for 2008 Texas crash 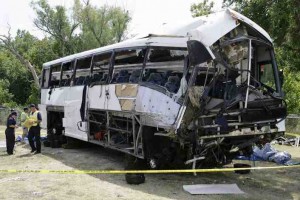 The owner of the bus company in Texas who was charged after the 2008 Texas crash that killed 17 people got three years of probation after reaching a plea agreement. The man, Angel de la Torre, was thought to be responsible for the horrific crash that took the lives of 17 passengers who were on their way to a religious retreat. Yen-Chi Le, the daughter of one of the victims, has revealed that … END_OF_DOCUMENT_TOKEN_TO_BE_REPLACED