You are here: Home / Nature / Hoard of Siberian Polar Bears Gathers for a Lifetime Feast on a Whale’s Carcass 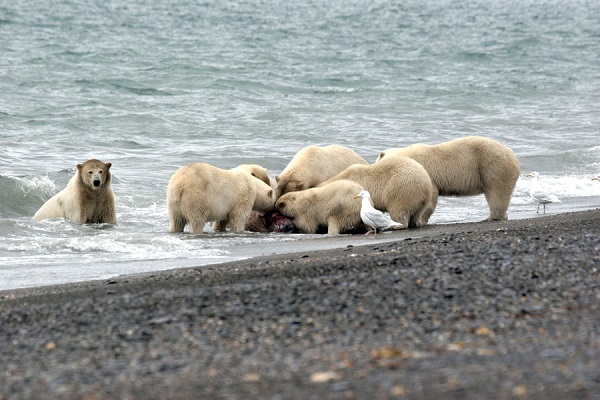 Polar bears are among the most vulnerable animals on the planet, as climate change has serious effects on their habitat. However, the classic image of the starving polar bear has been temporarily replaced with a more beautiful and encouraging view, after researchers spotted a group of over 100 polar bears feasting on a whale carcass off the Siberian coast.

Siberian polar bears gathered for the feast of their lifetime

There are only 26,000 polar bears left in the world, who have to face starvation due to climate change affecting their icy habitat. However, not all of them are condemned to starve, as displayed in a recent image captured off the coast of Siberia.

On September 19th, researchers observed how the carcass of a bowhead whale reached the shores of the nature reserve on the Wrangel Island. Apart from offering a spine-chilling view, the carcass managed to gather about 1 percent of the entire polar bear population, who came there for a memorable feast.

Researchers couldn’t believe such an amazing number of polar bears gathered in the same place and, instead of starving, ate what was probably one of the best meals of their life. Rodney Russ, one of the explorers who monitored the group, managed to count 150 bears who got together to eat the carcass. Other statistics cite a total of 230 polar bears living on the Wrangel Island.

Polar bears are not endangered, since some of their populations are actually flourishing. However, others are quickly declining. However, as climate change leads to a quick melting of the polar ice caps, people have become more concerned about this species. Also, they are trying to protect them from being hunted or put in danger by other human activities.

This unique gathering was one of the most impressive images for the tourists and researchers who witnessed it. It was truly touching to see so many specimens belonging to a vulnerable species gather and feast and, maybe for the first time, defy climate change.
Image Source: The Polar Bear Programme