You are here: Home / Tech & Science / The Thornton Triceratops, The Latest Discovered Skeleton, Is Now On Display 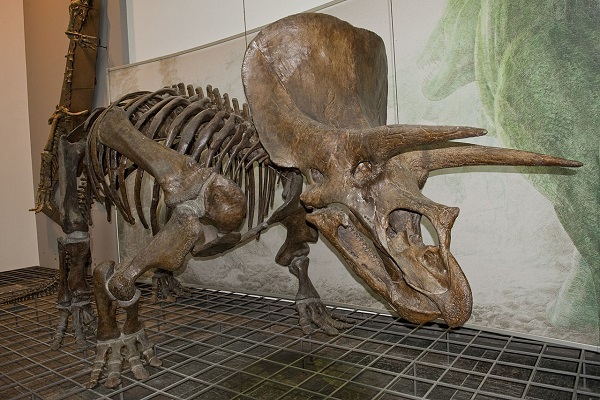 The Thornton triceratops fossils are currently on display at the DMNS.

A newly discovered triceratops skeleton, which was accidentally unearthed in Thornton is currently on display at the DMNS or the Denver Museum of Nature and Science and has been there since earlier this week. This newest discovery of fossilized remains came as construction work excavations.

The Thornton Triceratops, Still a Work in Progress

This recently discovered triceratops skeleton was unearthed as construction workers were excavating holes for a new public safety project. The remains were found in Thornton at 132nd Avenues and Quebec Street.

Following the confirmation of the discovery, a team of researchers part of the Denver Museum of Nature and Science took over and began digging out the skeleton. The site was closed to the public during this stage as the location was still a construction site still under work.

On Friday, the research team removed three casts from the excavation of the Thornton Triceratops skeleton. These included the triceratops’ neck vertebrae, a rib, and other as yet unidentified bones. These were all taken to the paleo lab of the Denver Museum, which was and will continue being in charge of the skeleton.

According to DMNS reports, paleontologists have already found a shoulder bone, a jaw bone, tail bones, horns, and vertebrae as well.

“Based on what we’ve uncovered up to this point, this find is likely the most complete Cretaceous-period skeleton ever found in this region,” declared Joe Sertich in a release. He is the Museum’s curator of dinosaurs.

The team of paleontologists also exposed pieces of the skull of the Thornton triceratops, and “a lot of bones” are reportedly still emerging. A DMNS fossil preparer, Natalie Toth, explained that this was a really good site for such a discovery.

Namely, the sediment holding it is soft sand, which makes it easier to dig out than solid sands or when in rock formations. The digging team is hoping to finish up the dig sometime in these next few days.

Triceratops Thornton on Display at DMNS

The parts of the Thornton triceratops skeleton that have already cleaned and cleared are currently on display at the DMNS and have been there since Saturday. Those interested in seeing the Triceratops Thornton skeletons have to go to the Prehistoric Journey exhibit at the museum.