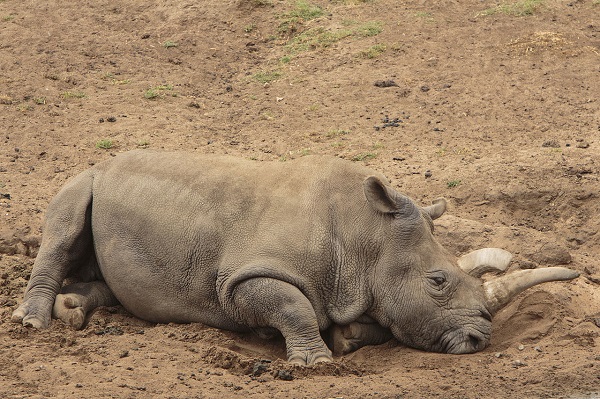 White rhinos are severely endangered due to extensive poaching.

Vince, a four-year-old white rhino that spent his days at the Thoiry Zoological Park, was found dead on March 7. The endangered animal is the first specimen to fall victim to poachers inside a protected enclosure. French authorities are currently searching for the culprits.

Rhino horns are in big demand on the Asian black market. The animal parts are so valuable that poachers would go to great extents to procure the precious merchandise, even if that means breaking into a zoo and killing an endangered animal that should have been heavily guarded.

Vince, one of the attractions of the Thoiry Zoological Park was born in captivity. The white rhino spent the first three years of his life in a zoo in the Netherlands before being acquired by the French zoological park in 2015.

The four-year-old white rhino was found dead on Tuesday morning by his keeper. Bruno, a five-year-old rhino, and Gracie, a thirty-seven-year-old female specimen, who lived in the same enclosure as Vince, were spared by the poachers.

According to the report, poachers managed to get through two metal doors and forced a third one that allowed them to enter the special lodges.

Once they managed to enter Vince’s enclosure, the criminals shot the animal three times in the head and then proceeded to remove his horns with a chainsaw. Unfortunately for them, they only managed to remove one of the horns, the other one remaining attached to the animal’s head. The authorities believe that the poachers were probably startled by outside noises or their equipment of choice malfunctioned.

What puzzles the authorities the most, is the fact that the poachers did all of this under the nose of five staff members and multiple surveillance cameras.

This is the first case of an endangered animal killed inside a European zoo. Vince’s death serves to prove that black market operatives will stop at nothing to procure the much-desired merchandise.

At the moment, almost all remaining rhino species are cataloged as endangered or near extinction, the last specimens being kept in zoos or conservation parks, poachers having no solution but to target the animals left in these specialized enclosures.

Vince has now become the new symbol of the fight against illegal poaching. Animal activists are searching for ways to stop illegal poaching activities, one of the solutions coming in the form of bright pink paint.

What do you think about Vince’s death? Do you believe that there is a way to stop the illegal rhino horns trade?