You are here: Home / Science / NASA Detects Activity in the Dead Crab Nebula 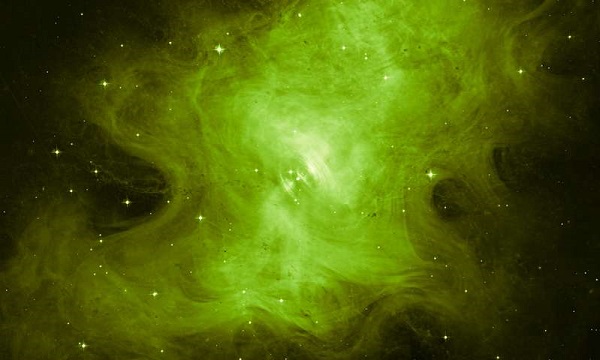 NASA added the green hue to the Crab Nebula for Halloween.

NASA has announced that it has detected a pattern of activity within the center of the supernova remnant Crab Nebula using the Hubble Space Telescope. The activity is similar to that of a beating heart, as it caused by the neutron star.

The Crab Nebula is the official term that astronomers have given to the remnant of a supernova. NASA previously believed that all activity within the nebula has ceased. However, new observations have detected the activity of the neutron star, located near the center of the remnant. This ‘beating heart’ has the same mass as our sun, but its matter is highly condensed into a sphere which spans a few miles across. However, because of its density, the neutron star is 100 billion times stronger than steel.

NASA has revealed in a press release that the heart of Crab Nebula is able to spin 30 times a second which produces a powerful magnetic field of up to one trillion volts. As a consequence, the energetic activity produces wisp-like waves that form an increasing ring.

Besides the neutron star at the center of the supernova remnant, the Crab Nebula also contains a huge amount of hot gas which glows in radiation on all wavelengths of the electromagnetic spectrum including X-rays and radio waves. The Hubble Telescope detected the glow in visible light thanks to black-and-white exposures. The discovery was originally made in 2012 between January and September by the Advanced Camera for Surveys system.

Crab Nebula has long been one of the most studied and analyzed supernova remnants in NASA’s history. The first ever noted observation was made by Chinese astronomers back in 1054 AD. They considered the nebula to be sort of a guest star which appeared during the day for 23 days a year. As it is six times brighter than Venus, stargazers from a variety of countries were able to observe it over the years as well.

French astronomer, Charles Messier, discovered the nebula while he was searching for a comet and ended up marking it as a fake comet. However, one century later, British astronomer William Parsons decided to create a sketch of the nebula which highly resembled a crab. Edwin Hubble was the first to propose the association between Messier’s fake comet to the Chinese sightings of the guest star.