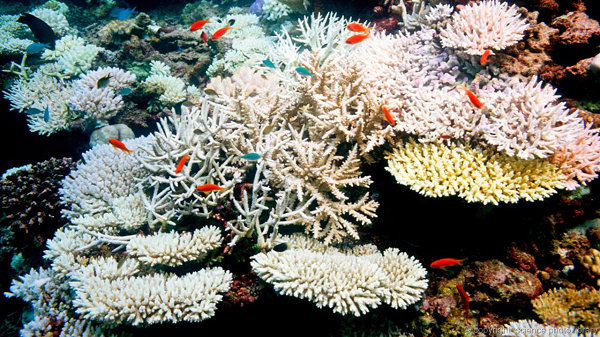 Researchers have discovered a spreading trend of zombie corals – they look healthy but are unable to reproduce – which crushed the hopes of such reefs ever repopulating areas destroyed by bleaching.

They also found that sunscreen (a common ingredient used to make it) is mutating and killing corals that have developed in popular tourist spots.

It’s a terrible thing that we are witnessing: a new study pointing to the harm to corals comes at a time when the world’s oceans are swept by the most widespread and devastating coral bleaching event in recorded history.

Climate change and the El Niño phenomenon have caused the water temperatures to reach a new record-breaking hot in years. With the increasingly warmer water, corals have begun to lose the algae that usually help them feed and live inside them.

Severe bleaching has already been detected in corals located in every major reef region around the globe. The damaging phenomenon has affected roughly 93 percent of the reefs on Australia’s Great Barrier Reef, killing almost a quarter of the reef.

Why are corals important? Because they are genuine hotspots of biodiversity, as well as nurseries for fish, which provide nourishment to about 1 billion people worldwide.

The new research was presented at the International Coral Reef Symposium in Hawaii, and it sampled 327 coral colonies across the Caribbean to evaluate the reproductive ability of elkhorn coral. In spite of looking healthy, this is, in fact, a threatened species.

In two sites in the Florida Keys, researchers found no eggs or sperm in the coral, which means zero ability to reproduce. This is how the team dubbed them the ‘zombie corals’ because they are hollow and will eventually die out.

“This is not good news,” said John Fauth, a fellow researcher at the University of Central Florida. The places with the biggest tourist attractions suffered the most severe damage.

Two samples from the more remote St Croix area, on the other hand, were found to have coral with 100 percent reproduction ability.

The study found that a chemical often found in sunscreen is toxic not only to coral, but also to shrimp larvae, sea urchin embryos, and fish larvae. UV absorbers and microbeads from personal care products are the ones doing the damage.
Image Source: Under the C Blog