You are here: Home / Technology / Buy a Car, Get an Assault Rifle for Free 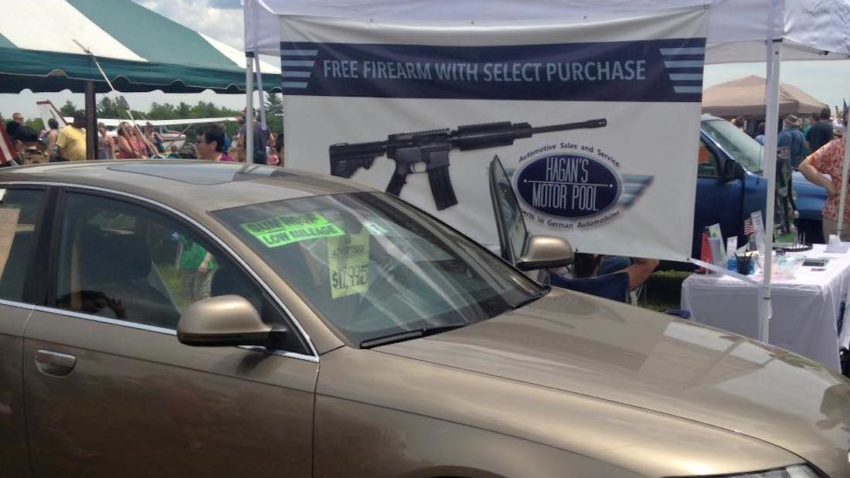 Buy a car, get an assault rifle for free. That’s the kind of deal you can get at the U.S. used car dealership called Hagan’s Motor Pool, in Rochester, New Hampshire.

Under the “Buy a Car, Get an AR” promotion, customers can get an AR-15 semi-automatic rifle for buying select vehicles. In one of the ads posted on its Facebook page, the used car dealer uses a pretty unconventional technique to attract clients: “Need a car? Want a free AR-15 also? Get both at Hagan’s.”

The New Hampshire business even made an appeal to users to promote its campaign and “Make America Armed Again,” referencing to one of the slogans used by the presidential candidate and business mogul Donald Trump.

The truth is that the unusual promotional bundle actually started last month, but it remained mostly under the radar. However, after the tragic Orlando shooting from the past week, the promo got more attention and sparked debate and controversy.

In spite of the heavy criticism from activist groups against gun ownership, the used car dealer has continued to sell vehicles with the AR-15 bundle.

For its part, Hagan’s says that customers who show interest in the promotional bundle have to pass a background check, meaning that the company is not looking to just hand out assault rifles to anyone who buys a used car.

But even so, it’s nothing if not a bit odd to offer a car + rifle combo. However peculiar it might seem, this is not the first time the AR-15 rifle has sparked controversy in the United States.

In 2015, for instance, Walmart – the nation’s biggest seller of guns and ammunition – announced it was ceasing the selling of the AR-15 and other similar rifles. Back then, the retailer said the decision was caused by low demand and had nothing to do with the gun controversy.

Used in previous mass shootings, the AR-15 was also believed to have been used in the recent Orlando massacre; later on, authorities revealed the Orlando shooter used a Sig Sauer MCX semi-automatic rifle.

Meanwhile, Hagan’s declared its promotional bundle does not stem from or encourage hate toward any race, political affiliation, or sexual orientation – it is simply a way to help people defend themselves.
Image Source: Boston