You are here: Home / Tech & Science / Chernobyl Exclusion Zone: An Oasis for Wildlife? 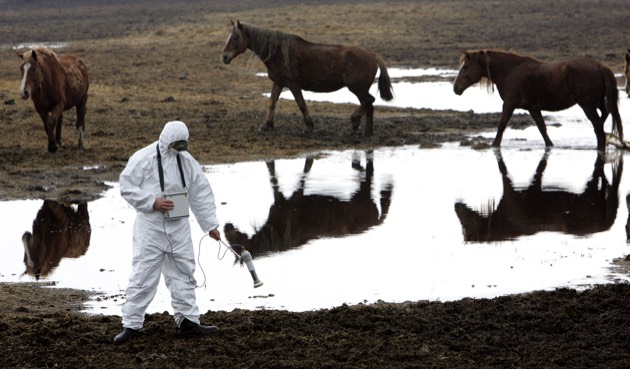 In the case of the Chernobyl exclusion zone, a statement from biologist Denys Vyshnevskiy describes the situation very well: “When the people left, nature returned.”

In an environment bereft of humans but poisoned with radiation, wildlife thrives and forms a giant natural reserve. Chernobyl is in the northern part of the former Soviet nation, the location of a very deadly explosion on April 26, 1986, spewed toxic clouds for hundreds of miles.

Nobody expected the so-called exclusion zone to be able to host any life forms at all, but the 2,800-square-kilometre-wide (1,100-square-mile-wide) area seems to be the perfect place for some species.

According to the estimation issued by the World Health Organization in 2005, the death toll from radiation-related illnesses could rise to 4,000 people, a figure combated by the Greenpeace as a gross underestimate.

There is no way for people to live unaffected in the exclusion zone, with radiation readings going through the roof. This might cause the animals living here to have shorter lifespans and give birth to fewer offspring, but Vyshnevskiy says their numbers are growing at rates unseen before.

It’s clearly a problem when radiation has less of an impact on nature and animals than humans have. According to researchers, human intervention is one of the leading causes of the accelerated rate of extinction for some species.

After the disaster, roughly 130,000 people were evacuated from the area; over time, species dependent on human crops and waste products disappeared.

At the same time, the death of the local Red Forest lost to the radiation that permeated the ground also led to various birds and rodents to wither away.

But as the old forest was cut down, a healthy one grew in its place. Indigenous species that used to live in the area long before the catastrophe came back.

That’s how wolves, bears, elks, white-tailed eagles, lynxes, and many others started making regular appearances on the researchers’ cameras.

Back in 1990, an experiment with a handful of endangered Dzungarian horses was surprisingly successful, as they took root and multiplied to the hundreds in the untended fields.

While Vyshnevskiy sees the rebound as an “environmental renaissance,” other scientists are more cautious.

According to Tim Mousseau, a professor of biological sciences at the University of South Carolina at Columbia, the high levels of radiation found in “hotspots” across the area could hardly be called “a paradise for the animals or an oasis.”

He added that wild populations are apparently altered by the disaster, and that “even the cuckoo’s call is affected.”
Image Source: Science Focus