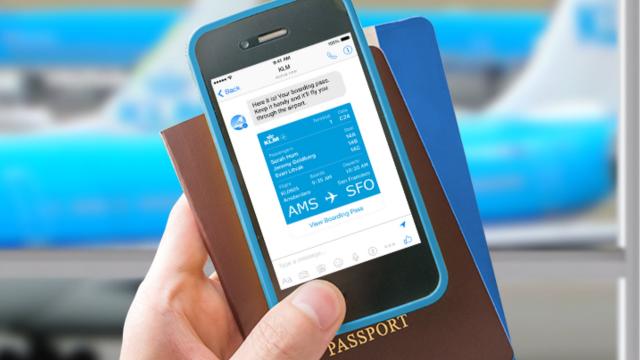 KLM airlines customers will be able to receive boarding cards, flight confirmations and status updates, reminders, and customer service directly through Facebook Messenger as the two companies have recently announced their partnership.

Users were expecting this expansion of Messenger. At is F8 developer conference last year, Facebook first unveiled plans to transform its messaging app into a platform – one that would offers users a lot in-app perks and services.

Zulily and Everlane were the first retail partners that were announced, though Facebook revealed later on that KLM airlines will join the mix, too. So here we are: the day is here when the KLM partnership comes into effect, even though we don’t know much about it.

Messenger chief David Marcus did, however, confirm the new feature will become available to all users “in the coming days and weeks.”

One of the biggest airlines globally, KLM already has some experience with social networks. In 2014, the company created a new service that allows people to pay through Twitter and Facebook.

Getting involved with Messenger so directly is, however, a major move, not only for KLM, but also for the way companies will communicate with customers. According to Pieter Elbers, CEO of KLM, offering the new service via Messenger is in line with the company’s social strategy: being where the customers are.

The new Messenger partnership with KLM will be available to all customers who book tickets through KLM.com and who opt to receive information via Messenger. At the moment of writing this article, more than 15 million users have ‘liked’ KLM Facebook’s page.

Last year, the company activated the Messenger button on its Facebook page, and according to KLM reports, people used this form of communication 40 percent more.

In light of such encouraging figures, KLM decided to take the service one step further and offer customers the option of “receiving all relevant flight documents and information in a single Messenger overview.”

At first, Facebook’s move of cutting Messenger out of the native app was seen as unpopular, as users were required to download and use two separate apps. However, the messaging app took a turn for the better ever since Facebook decided to turn it into a platform in itself; now, more than 800 million people use it monthly.

As it incorporates more and more services – like online payments, sending money to friends, buying from retailers – into Messenger, Facebook is slowly taking over third-party apps, becoming the only one you’ll ever need.
Image Source: nu.ul