You are here: Home / Technology / New Atlas Is “Definitely Kind of Jaw Dropping“ 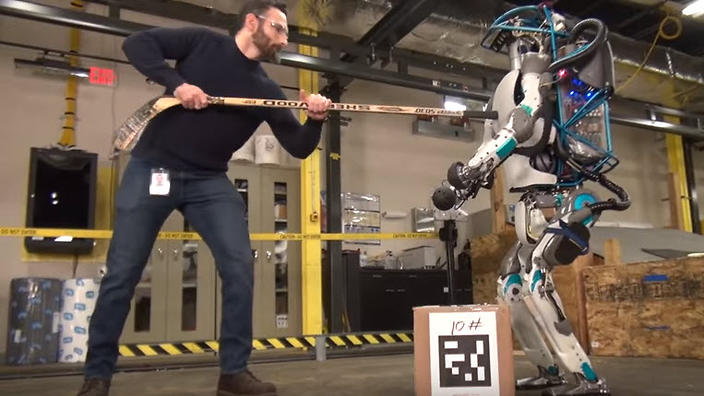 It won’t be long until the robots created by Boston Dynamics will be pushed too far. The Alphabet-owned robot company from Beantown has released a new video showing off the impressive skills of its latest gen robots, and people don’t know what to make of it.

Atlas the robot is shown keeping its balance and “cool” in spite of all the shoving, tripping and keep-away playing. Sure, there’s no doubt the droid looks funny when walking, but Judgement Day awaits us if Atlas gets tired of the messing around one day.

But before that happens, we’re still in awe of the advances presented in this impressive bipedal platform. In the previous generation, Atlas had to be connected to an external power source, whereas this version is battery powered.

In its quieter, more agile, sleeker form, the new Atlas is “definitely kind of jaw dropping” as Ken Goldberg, robotics professor at UC Berkeley, simply put it. As the engineers smoothed out the motion, the results make people feel rather weird, especially when they see the video of Atlas being prodded with a hockey stick.

Goldberg added that this new generation of robots will definitely trigger the uncanny valley response in a lot of people – that feeling of uneasiness when we see an artificial product get too close to resembling our human traits and reactions.

The weird bit is that most people would have the same reaction if someone pushed them around, which makes us expect Atlas to turn around and just blast the guy with the hockey stick with a laser beam.

If the video made you feel uncomfortable, congratulations, you’re a normally functioning human being with a sense of empathy. But people need to understand that employing these playground tactics is meant to get a response from the robot.

Goldberg explains that robots usually find it difficult to respond to an impulse – a very sudden action that has a fairly large impact on the machine. This is what makes Atlas’ response the more impressive, because the guy is challenging the robot’s very center of gravity by pushing it right in the chest.

The only details about the robot’s specs come from the video’s description, which mentions Atlas’ weight (180 pounds) and height (5’9″).

The bot is packed with sensors – in its head and limbs – to help it navigate and not tip over when walking. With all this gadgetry implemented in it, the robot can walk on snowy terrain, pick up boxes, and get back up after being pushed to the floor.

Boston Dynamics has yet to respond to the requests for comment, but maybe nobody is picking the phone because robots have slaughtered everybody there.
Image Source: SBS