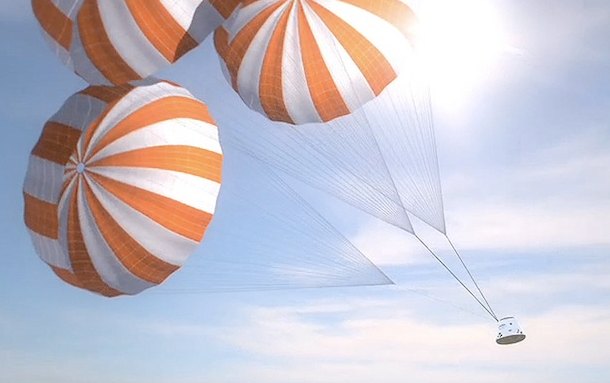 If any of our readers happen to live in the desert near Coolidge, Arizona, you might have seen something red and flailing in its descend from the sky recently. If you did, there’s no need for alarm.

No, it wasn’t a UFO, it was just the privately-owned SpaceX trying out four parachute systems in preparation for the landing of its manned Crew Dragon spacecraft. In the near future, the red and white parachutes will safely land the spacecraft and the astronauts back on Earth from the International Space Station.

Testing the parachutes was part of SpaceX’s cooperative mission with NASA’s Commercial Crew Program. This phase of the test didn’t include, however, the testing of the drogue chute, seeing that this trial is just one in the many to come in the collaboration with NASA.

SpaceX is an American “aerospace manufacturer and space transport services company” whose CEO is Elon Musk. His company is known for its endeavors in advancing commercial space transport.

Test flights of space hardware like this one are not uncommon for SpaceX, as the engineering teams need time and experiments in order to assessments about the stability and durability of the systems.

In the future, the Hawthorne-based company plans to improve these tests, and make them more realistic and better at imitating outer space conditions. Such tests would ensure that the upcoming missions and operations are more successful than not.

Initially, the SpaceX parachutes will land on water, but they are to ultimately be able to safely land on solid ground as a simulation of reality. Even though this is a risky step, it is necessary for the missions SpaceX will soon be sending to the ISS.

SpaceX will employ eight SuperDraco engines solely for this purpose; the company has already started testing its landing ability in November of last year, in Texas.

Along with the parachute-assisted landings, Spacex is preparing to test special propulsion systems for its spacecraft. If they eventually prove successful, the parachutes would only be used in the case of emergency.

Currently, both SpaceX and Boeing are NASA partners, but under separate contracts. But seeing that whatever goes up – in our case, astronauts and spacecraft – must eventually come down, SpaceX is preparing to bring its best game in landing its spacecraft in safely and securely.
Image Source: Astronaut