You are here: Home / World / Curious Snowy Owl Flying Majestically was Captured by a Traffic Camera 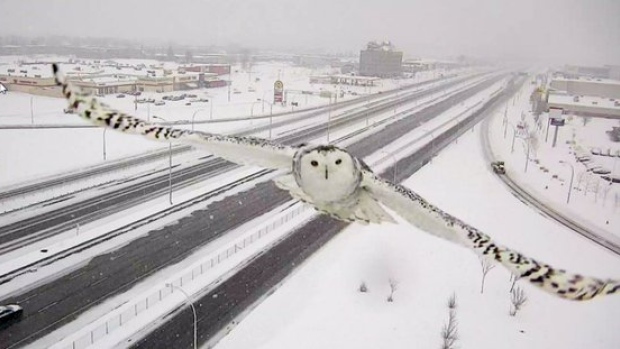 Right now, we wish traffic cameras could win one of those wildlife photography awards, because this captured Hedwig-like deserves all the credit.

CCTV has caught a stunning snowy on one of their cameras, resulting in some unlikely competition for all the seasoned wildlife photographers out there who are looking forward to this year’s awards season.

The stunning images of a curious snowy owl flying majestically was captured by a traffic camera on a motorway in Montreal, Quebec, the Canadian province. The now famous camera belongs to Transport Quebec and the fortuitous occurrence with the white and black-spotted owl took place on January 3.

The pictures first surface on the internet when Robert Poëti, the transport minister of Quebec, tweeted the owl snaps with the caption [translated]: “Magnificent snowy owl picked up by surveillance cameras of the road network on the A-40 in the West of MTL.”

He also shared the pictures on Facebook, adding: “An impressive solo was captured in full flight by the surveillance cameras of the road network on highway 40 … in the west of the island of Montreal. Here are a couple of shots of this beautiful snowy owl!”

For all those curious is this could be more than just a one-time event, all of the Ministère des Transports du Québec’s traffic cameras also stream online, so you could do some owl-watching from the comfort of your own home. Notably, the feed is refreshed only every five to seven minutes.

Although they are definitely striking, the owl snaps are neither a “photobomb” nor a “selfie,” as the media has so often misreported. The bird didn’t appear in the background of someone else’s picture, and it also didn’t take the photo itself. Let’s call it as it is: a beautiful and surprising shot.

According to Barbara Frei, chief of the McGill Bird Observatory, the owl – which is coincidentally one of Quebec’s symbols – might have been searching for a convenient place to land on. Highways are particularly attractive given the fact that they are near open, grassy fields nearby, fill with small rodents, their favorite prey.

They also like perching on high lamp posts in between hunting trips; they will spend their “winter vacation” in southern Canada, where they will migrate to the Montreal region or places in Ontario.

In Canada, the snowy owl is protected from hunters, but it’s nearly impossible anyway to sight the bird in the wild. Unfortunately, the owls are occasionally killed in car or airplanes collisions.
Image Source: CBC