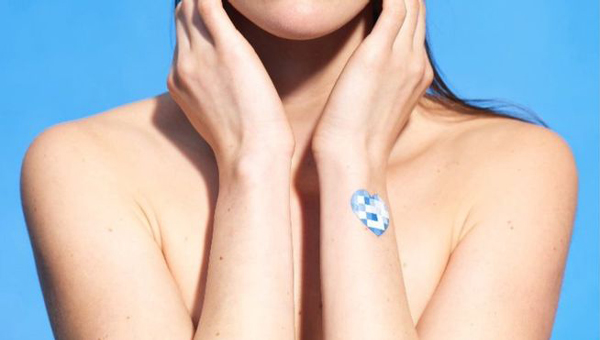 Spending time in the sun can be both a blessing and a curse. On one hand, it is the best source of Vitamin D, but on the other hand, getting sunburned isn’t something we are into.

But thanks to L’Oreal, the French cosmetics company, you might have a solution for getting the perfect amount of sun. The beauty giant has released at the Consumer Electronics Show (CES) 2016 the beta version of a stretchable skin sensor that monitors your ultraviolet light exposure.

All your readings will be available to you via the L’Oreal companion wearable My UV Patch. Those interested in the technology will have to wait until later in 2016 when the company will roll it out more widely under La Roche-Posay, L’Oreal’s famous dermatological skincare brand.

It’s rather impressive what the company has developed: a transparent adhesive the size of one square inch and measuring half the thickness of a strand of hair. Thanks to its photosensitive dyes, the patch can detect when your skin changes tone colors due to UV-ray exposure.

After taking a walk in the sun, users can take a picture of their patch and upload it to the mobile app. The dye squares are instantly analyzed, determining the amount of UV exposure the wearer has received.

L’Oreal’s app has taken it a step further by offer the user sun-safe behavior recommendations. The company recommends users to wear the patch on their back or on the back of the hand for up to 5 days for the most accurate readings.

With so many smartwatches and gadgets promising tech lovers to track their steps and monitor their sleep, L’Oreal thought of looking at other parts of the body. This type of technology has already been tinkered with, but rivals have mostly focused on developing bracelets.

But having to wear a patch – regardless of the size – might interfere with the device’s sales. Even though some think this could be a hard sell, L’Oreal’s argument in favor of that is solid.

According to a study, awareness regarding the risks of unprotected sun exposure has reached 92 percent of the worldwide population; even so, not even half of those surveyed have ever visited a dermatologist to check their moles.

With skin cancer ranking as the most common form of cancer in the U.S., the device could be a helpful tool for educating consumers about their personal exposure to harmful UV rays. According to Guive Balooch, global vice president of L’Oréal’s Technology Incubator, “technology is the new way for consumers to experience beauty.”
Image Source: Brand Channel