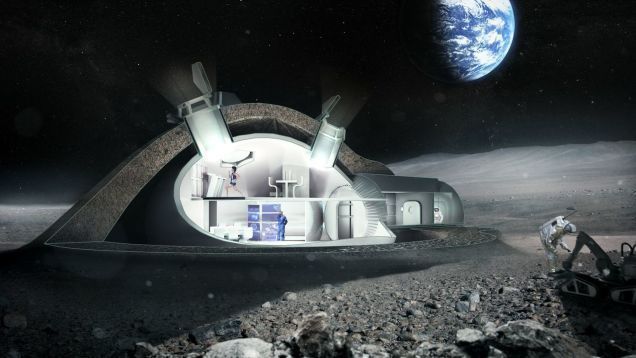 Europe wants to focus on the moon

Mars can wait, because the ESA wants a “Moon Village” by 2030 as the first step after the International Space Station (ISS). The manned mission to the Red Planet might have to wait, according to the European Space Agency (ESA). Our planet’s natural satellite should come first.

The manned mission for Mars seems to be solely NASA’s ambition at this point in time. It appears that the U.S. based space agency has remained alone in its goal of sending men so far away from our planet. The ESA’s ambitions aim much lower, but are arguably more realistic, with better prospects. Mars is much further away and there are numerous factors that have not yet been properly researched.

Even NASA officials are starting to doubt the possibility of  a manned mission to the Red Planet by 2030. There are various conditions that should be taken into account, significant investments, and not to mention that extreme strain that will be placed on the crew. Both physical and psychological evaluations have not yet understood the full effect of the prolonged exposure to outer space.

For now though, NASA seems firm in their plan. In fact, while ESA shoots for the moon, the U.S. space agency will likely be staying away from that international effort.

However, while it seems less grand, the ESA’s plan is no walk in the park, and it’s certainly not without a proper target. With the international effort of several agencies from numerous countries, they plan on sending both robots and humans on the moon. The end goal is to create a lunar facility that will be the center of space exploration and research.

It will start with lunar resources, such as water ice, minerals, and solar energy. After talks of exploring and potentially using them, we should first confirm that such a thing is even possible. The debate will be put to rest if they are worth it, and then plans could move forward. Thus, the first step is to research and explore lunar resources, along with their use.

Then, the technology will advance further until the moon will successfully take the place of the International Space Station. That means the “Moon Village” could become our newest ‘out of our world research facility’ by 2030. By then, the ISS would be out of business.

According to the ESA, “the vision is truly international”. They plan on researchers and scientists from all around our planet to be viable for an excursion to the moon to their facilities. The highest aim of the project is for Earth’s natural satellite to become the starting point of all deep space exploration. Basically, their order would go: moon first, Mars second.

So far, no specific launch date is set in stone, but it will reportedly be around the end of the 2020s.