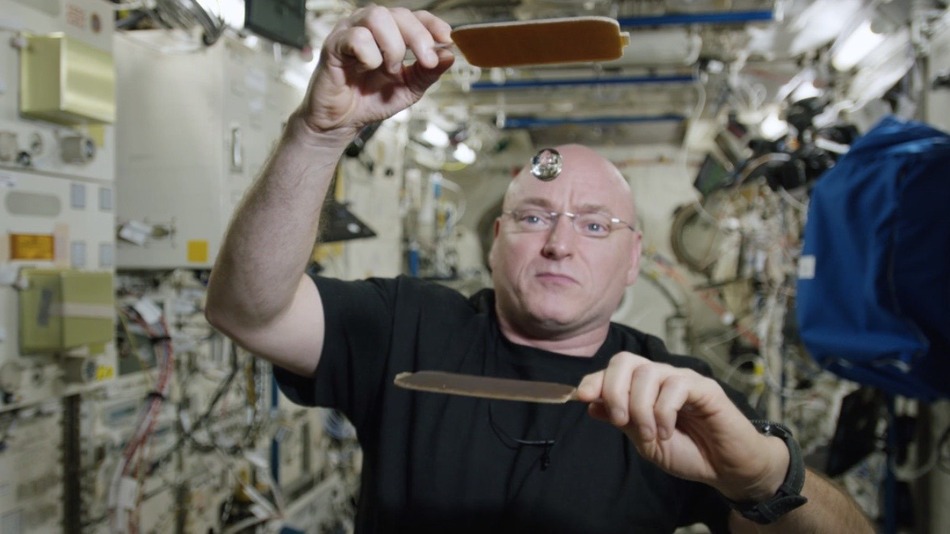 After breaking the American record for the longest consecutive days spent in space, astronaut Scott Kelly is slowly heading for his next milestone: the end of an almost year-long mission.

The International Space Station has been Kelly’s home for 300 days now, and the astronaut has done plenty of quirky activities to pass the time. For example, he’s put a spooky mask on and haunted the station’s hallways, has cultivated and eaten space lettuce, and even grown flowers.

In celebration of his 300th day in space, Kelly played a solo round of water ping pong – and no, it’s not the kind you play in a pool. This variety uses a tiny glob of water instead of a ball. You can watch the video here with a 4K option thrown in there for your enjoyment.

It’s funny to see Kelly bouncing the water between two hydrophobic paddles and saying dryly, “Neat stuff.” It’s more than neat – it has a mesmerizing touch to it. We’re not used to this toned-down version of Kelly, especially after all the excitement he has shared on Twitter and Instagram.

Some might argue that Scott Kelly is bored out of his astronaut mind, but it’s natural that the thrill of space travel should wear off, especially after 300 days of it. While we Earth-bound humans still wrap our minds around what it’s like to be out there, space travelling is Kelly’s day job.

And even though the most recent video filming mundane activities on the ISS could be seen as dull and goofy, there’s plenty of information to be gathered from it.

For example, those are not regular paddles Kelly is using; they are laser-etched and then sprayed with Teflon. The combination roughed up the surface enough for the material to become water-repellant.

The video is part of an interesting experiment, seeing that it was sent down to Earth in 4K. After NASA sent a RED Epic camera on the ISS last year, the crew has been using it to shoot all sorts of things, which have then been included in NASA’s new 4K television channel.

It’s truly impressive to see the space station in 4K and gain a better understanding of what it means to be living up there, and NASA’s interest in filming more activities for us down here on Earth has been welcomed by all. Scot Kelly’s mission ends later this spring when he’s scheduled to come back.
Image Source: Mashable